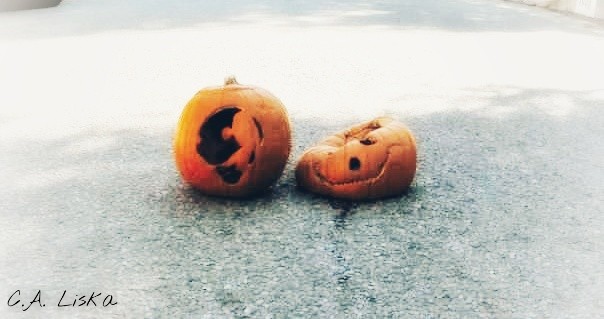 There are very few Halloween stories that involve an adult man dressed for the big night as Freddie Mercury, only to be mistaken for Nacho Libre and then crying so uncontrollably over this miscarriage of masquerade justice that the only thing that will lift his spirits is to witness a pair of pumpkins get run over by a speeding Porsche in the Hollywood Hills.

Did I mention he was drunk?

Today’s story, while inspired by the most numbingly tedious of pseudo-holidays known to man in the last 5,000 years, has none of the above elements—although I’m sure we will all wish it had.

My story delves into the unremarkable history of Halloween, a day which, from its ancient pagan roots, has grown into the modern pagan tradition of teaching children to disguise themselves beyond recognition, go door-to-door begging for candy and, if the begging doesn’t work, threaten the neighborhood with devilish reprisals in the form of property damage—something the police and municipal judges like to call vandalism. Or criminal mischief.

My neighbors, who seem perfectly normal most of the time, love Halloween with an unbridled passion and this year they have decorated their house with spiders the size of Land Rovers. I find this fascination with arachnophobia rather disturbing, so I’m staying indoors until the spiders are gone. (If we’re invited to their party, I’m bringing a can of Raid.)

It should be noted that after the advent of Christianity, the pagans were allowed to keep a handful of pagan holidays that featured a lot of naked dancing in scary forests of trees with moss dreadlocks. This behavior was allowed so they wouldn’t desert the Church, thereby leaving the Grand Poobah and his minions in dire straits for the lack of petrified sheep testicles which were used as legal tender back then. In addition to Halloween, the pagans—after a few weeks arguing about what binding arbitration might mean—got to keep St. Patrick’s Day, Fat Tuesday, Oktoberfest and Thanksgiving, holidays that rely heavily on food and alcohol consumption, with Thanksgiving boasting a further attraction of virulent political discussions and football.

Immediately preceding All Saint’s Day, which is only observed in the most impoverished and superstitious parts of Italy and all of Ireland, Halloween is notable for having the pumpkin as its stand-in for something more serious, like animal sacrifices or a golden calf. This is much in the spirit of Easter whose main focus are giant pastel rabbits who bring eggs to leave in public parks, which is a clear violation of the First Amendment that guarantees our not having to worship rabbits at all, no matter what Pat Robertson says.

Pumpkins, which are related to cucumbers in a way that we don’t need to go into here in case children are present, are grown everywhere in the world except Antarctica, a part of the world that is almost as unsustainable as Las Vegas but much cheaper to visit. But that’s now. Back then, you could only find pumpkins in every square inch of Mexico and in Albany, New York, where, in 1584, the French explorer Jacques Cartier literally stumbled over one of the gourds and yelled, “gros melons!” in his native French. Out of curiosity, he cracked one of them open and stuck his hand deep into its slimy, stringy interior and yelled “gross melons!” right before he threw up.

Recognizing that the future was not in faux agricultural products, Cartier returned to New York City, but only after discovering Canada and gifting it to the French. In the heart of Manhattan on Rue de Cinquième, Cartier opened a jewelry store on the ground floor of Trump Tower. It was in his landlord’s honor that Cartier renamed the melon “pomion,” an obscure French word that means “corpulent oaf.”

But I digress, which is so frequently my wont.

Although Pilgrim-like Americans briefly enslaved the Irish to knit knock-off Aran Island sweaters and cultivate tubers, they (the religious wackos dressed in black) were nonetheless intrigued by their (the Irish, dressed in green) starch-only diet. They also were inspired by the Irish habitually carving turnips into lanterns. This had nothing to do with Halloween and everything to do with illumination so the wee ones wouldn’t trip over any of the fairies and be condemned to an afterlife as mummified gnomes in English gardens with small herds of fiercely territorial Corgis.

This might be hard to believe, but at whatever time in history all of that was, pumpkins were more plentiful than turnips. What they share in common is that both of them taste horrible. Though the taste of turnips could be improved with salt, pepper and arsenic, pumpkins were a lost cause until somebody invented a recipe for a gluten-free pie that called for three pounds of sugar for every one ounce of pumpkin flesh. Despite their being low in calories, fat and sodium, and high in fiber, pumpkin flesh is about as appealing as liver sashimi, but slimier. It also smells worse. The fact that pumpkins are a good source of Vitamin A, Vitamin B, potassium, protein, and iron is moot because all of that nutritional goodness is readily available in easy-to-swallow pills.

The support for whatever hypothesis was being hypothesized is that Americans will spend about $377 million this year on a food product that is scraped onto newspaper and thrown out. What will remain is a shell with various holes that will soften and rot on the front porch because nobody wants to touch it.

Baseball fans will save the seeds but lose interest in processing them when they remember how cheap they are compared to everything else at any ballpark. And if somebody wants to actually make a pumpkin pie because Uncle Wally the Fascist is coming for Thanksgiving, that person simply buys a 15-ounce can of Libby’s pumpkin puree, which may or may not be spiked with saltpeter, and follows the recipe on the label.

Carving pumpkins is kind of a fun family activity that has a lot in common with simple medical procedures that may or may not call for a general anesthesia. Carving a pumpkin can be dangerous and you are advised to read the warning labels that come on every pumpkin. If you need more information than what appears on the label, contact the FDA and request a copy of its 28-page pamphlet, Persistent Problems with Pumpkins, a kind of user manual for idiots.

Nobody knows for sure the genesis of “Trick or Treat,” but cloistered Halloween scholars donning glow-in-the-dark skeleton costumes and jaunty berets have suggested that it was an attempt by South Jersey Mafia dons to soften the sound of “protection racket” or “extortion.” They suspect both may have involved kneecaps.

Children between the ages of 13 and 27, are considered too old to beg for candy, so they go right for the tricks, many of which involve such highly creative acts as throwing eggs at people’s homes in neighborhoods where they are unlikely to be recognized, soaping windows, or spray-painting pithy sayings on walls or automobiles.

Sadly, the days of moving outhouses off their foundations and watching people stumble into the poopy pit are long gone.

One trick in which I may have been peripherally involved focused on a farmer’s a manure spreader. (I’m not sure of the statue of limitations and my attorney is currently too busy trying to avoid extradition to Ukraine to answer any of my legal questions.) Older models of manure spreaders were remarkably easy to disassemble and then re-assemble on a flat-roofed farm building. The result was quite funny to just about everybody but the farmer.

And what would a discussion about Halloween be without at least a mention of costumes, which are supposed to scare the bejeezus out of everybody. (This is why Trump costumes are so popular.) They should also glow in the dark. (Another reason why Trump costumes are so popular.) In Montana, costumes don’t much matter because it is usually so cold that children must dress in no fewer than four layers of thermal stuff.

At that point, the kids look like colorful roly-poly garden bugs—as if maybe they’ve had too much pumpkin pie.

Libby’s® Famous Pumpkin Pie
As copied directly from the can