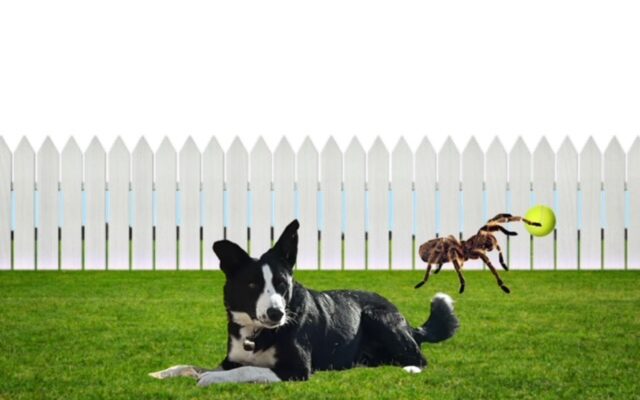 Of all the responses and comments I got about last week’s essay, “The Truth About Cats and Dogs,” the most interesting came in the form of a challenge. My longtime friend, Ira, suggested I adopt a tarantula to supply at least enough fodder for another essay.

Well, Ira, I don’t need to adopt a tarantula to write about one. My background with spiders is enough for me to know that they, along with other creepy beings (bats, sea urchins, banana slugs, Trump Republicans) make lousy pets.

I suffer from selective arachnophobia. That is, I’m only afraid of those spiders which can bite me and cause undue suffering (skin lesions, death). Sadly, I don’t know which spiders might be able to do that. And, quite frankly, I don’t care to learn. I believe I could identify a black widow, based on its colored, hourglass shaped marking on its abdomen. I just don’t care to wait around long enough for one of them to roll over and show me its belly.

My major defense against all spiders is that I’m rarely without shoes on my feet.

I can quite easily identify daddy-longlegs, the world’s most venomous spiders whose jaws are so small that they can’t bite humans. That, of course, is an urban myth. In fact, a daddy-longlegs, a ground-dwelling creature, is not even a true spider. It is an arachnid, but not a spider because they have one body section (spiders have two), two eyes on a little bump (most spiders have eight), a segmented abdomen (unsegmented in spiders), no silk, no venom, a totally different respiratory system, and many other differences. Not all of them even have long legs.

There was no shortage of daddy-longlegs at my grandparents’ house in western Nebraska. I’d bravely pluck them from the stucco walls by one their legs and fling them directly at my sister’s face. Her screams were matched only by those of my grandmother’s when I gifted her a snapping turtle that I had found in the dirt road that ran in front of her house.

My son-in-law likes spiders to the extent of letting them crawl around on his hands while he tries to rub their soft underbellies. He grew up in a household that had little money. His only toys, apparently, were things that he could find. He chose spiders.

But to return to the idea of having a tarantula as a pet: You can’t really play or cuddle with them. They won’t fetch anything they can’t eat. I wouldn’t know where to attach a leash to take one for a walk around the neighborhood. And I still associate the little creatures with an episode of The Tonight Show in which Steve Allen allowed several of them to crawl all over his body. I believe the following act was Frank Zappa playing Bach on an over-turned bicycle.

The tarantula is noted for having inspired a dance—tarantella—in the south of Italy, sometime during the 15th to the 17th century. The bite of the tarantula was what caused tarantism, a disease or form of hysteria. The cure was frenzied dancing, accompanied by tambourines.

Nothing inspires frenzied dancing—with or without tambourines—more than mice. This is difficult to understand. They are the size of furry walnuts and are the inspiration for an entertainment franchise created by Walt Disney. Mickey and Minnie were anthropomorphized, along with countless other cartoon animals, to endear them to us.

Real-life pet mice, as well as their much-larger cousins, rats, are named because it’s what we do to all living things. It’s pointless because pet mice will never learn their names at any demonstrable level. They never see life outside of their cages. Like the tarantula, they won’t fetch or obey the tugs of a leash. And they don’t offer the soothing purr of a cat.

For reasons I’ll never understand, some people are so enamored by reptiles that they keep them in cages and feed them mice they steal from people who keep mice as pets.

When I was a kid, we went on a family vacation to Florida. While my mother was getting her hair done, Dad took me and my sister to a pet store where he purchased an alligator that would be shipped to our Chicago home. Jo, my sister, and I were excited. Mom didn’t know. Dad built a rather elaborate cage for said reptile, which we named Al. Clever, huh? A package arrived one day, and my father carefully unpacked it on the kitchen table. It jumped from the table to the linoleum floor and Mom jumped onto the counter. We transferred the 12” baby alligator to its cage. By morning it was dead.

I once crashed on a friend’s couch in Cleveland when I got the rather foreboding sense that somebody was watching me. I awoke to see my host’s face within inches of mine.

“Have you seen Bob?” he whispered.

“Snake!” I enthused as I pulled on my clothes.

“I’ll never know,” I predicted, running out the door.

Courtney showed an early talent for picking up lizards off rock faces. This is a rare and useless talent, unless you wish to have lizards as pets, which she did. They lived in an aquarium in her room and Geri would go to a local pet store from time to time to buy a sack full of crickets. Watching the lizards catch the crickets was about as interesting as it ever got.

We had friends who owned an iguana. This prehistoric-looking reptile was about three-feet long, iridescent green, and it roamed freely about their house. As it did, it stuck out its serpent-like tongue in a menacing manner which indicated it was hungry, maybe for one of their cats. Our friends were more than willing to place this creature on anybody’s shoulder. I always declined.

Next to an ant farm, goldfish are the ideal pets. Not fancy tropical fish who need a temperature-controlled tank of salt water to swim around in, but good old-fashioned dime-store goldfish with eyes like Marty Feldman and who can swim their laps in room-temperature tap water. Since they only live about four or five days, there’s no long-term commitment like there is with, say, a pet alligator.

Unless it leaps to its death from a kitchen table.

Photo manipulation by Courtney A. Liska

The term for eating insects is entomophagy. While I don’t necessarily recommend its practice, we might not be far from having to rely on insects as a food source. I plan on being dead before that happens.

“Locusts (actually grasshoppers) are used by various African groups consistently as food,” reports Smithsonian. “The locust individuals are gathered in the early day before they are active, then boiled before being cleaned and salted. Even the legs are used by grinding and combining them with peanut butter and salt.”