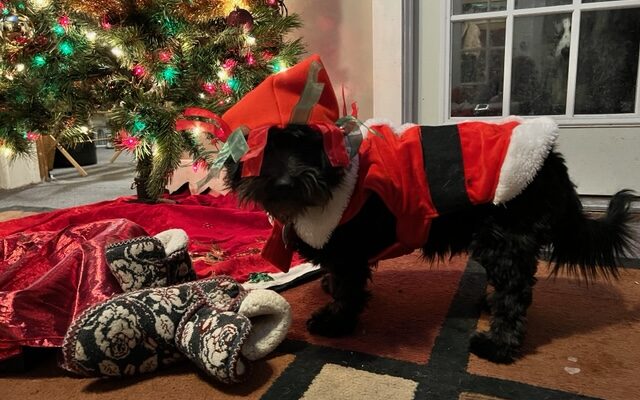 Being genuinely and irreversibly old, I feel more than qualified to issue a holiday shopping guide that reflects the needs and desires of the elderly—with no regard for whatever holiday it is they might celebrate.

Old is old without regard to faith, creed or race.

First of all, no fruitcakes. Dense bread with dried fruits and nuts and other unidentified ingredients is inedible at best, if not downright toxic and generally bad for the environment. If not properly disposed, they contribute to the creation of greenhouse gases. Their only real use is as doorstops. The bravest recipients simply re-gift them to somebody they don’t particularly like but feel obligated to gift. We’ve been exchanging the same fruitcake for thirteen years with a family across town.

But getting back to that friend for whom you feel only a seasonal obligation, any recording by Kenny G would suffice.

Another rule to follow when giving to the elderly says that nothing should be gifted that would ever need dusting.

Tchotchkes, for instance. Yiddish for “worthless little pieces of crap,” they are the trinkets one might find in overpriced souvenir shops while traveling to odd places. While aesthetically pleasing to the purchaser, they serve zero function. They take up space on shelves and tabletops and they tend to need a lot of dusting.

The worst tchotchkes by far are the souvenir commemorate plates that come with their own little easels, thereby making that cleaning chore a two-step process. And who wants any reminder that Arkansas was perhaps once a tourist destination anyway? Oy.

In that same league are the demitasse spoons with decorated handles that need a rack for their display. They not only need frequent dusting, but they also actually need polishing on the off-chance somebody might drop by for a visit.

Books make terrific gifts but there are some hazards in their selection. Just because you have an abiding interest in the secrets of the Amazon rain forest, don’t assume that Aunt Sophie does. A gift certificate to a local bookstore is a safer bet. And you can make it even more special by offering her a ride to the store and afterwards, a nice conversation over a cup of coffee. Now that’s a gift to both you and Aunt Sophie.

And what is one implying if one gifts somebody a health club membership?

Pets are generally a lousy gift. If one wants a dog, cat or ferret, it’s likely that one will get one of their own choosing. There are obvious exceptions, however. My kids gifted me with Buddy, a bichon frise who happened to be the best pet I’ve ever had. When he died, they gave us a blind dog—a cross between a Shih Tzu and a poodle—whose biggest joy is to annoy me with a shrill bark that seems painful. I know it is for me.

After my grandfather died, my father decided his mother—my babička—needed a companion. Dad bought babi a parakeet—an expensive one with a little metal ID tag around its left foot. It escaped from its cage the night before we were to take it to babi and committed suicide by flying into a window. Dad made a late-night run to EJ Corvette, kind of a poor man’s Kmart with a pet department, and bought a cheap parakeet. He took the band off of the dead bird and put it on the cheap one.

The next morning, we took it to babi. She was thrilled in the way most of us are upon receiving a fruitcake.

Dad put the cage on the kitchen table. In time, babi came to like the little bird. She taught it to swear in Bohemian. It outlived her.

It’s been noted that as a species we spend the first two-thirds of our lives amassing stuff and the last third getting ride of it. The equation loses much of its meaning for those who die before realizing that it was time to de-clutter.

Babi had amassed few things in her rather long life (she died in 1979 at the age of 95). She barely read English, but subscribed to the Chicago Sun Times to use its pages as cage liners for her bird.

My grandmother was a terrific cook who had only the basic pieces of kitchenware in the tiny kitchen she had after her husband died. From the perspective of less-is-more, she would have been challenged by the ideas of cooking that have emerged since her death, although we did have boil-in-a-bag before her passing. Today, of course, it’s called sous vide because italics lend a sense of importance to the simplest ideas.

Her response to an air fryer would probably have been “and so what’s wrong with schmaltz?” As far as the Instant Pot cooker is concerned, she no doubt would have said “and so what’s the hurry?”

Holidays for the elderly can be as difficult as they can be for the young. There’s built-in anxiety—both revolving around the great expectations of family, friends, food, et cetera ad nauseum.

And the gifts. Many children are visibly disappointed upon the opening of a box with socks, pajamas, or fuzzy slippers. Those children, in my opinion, need to have the next year’s holiday privileges revoked.

In the meanwhile, the older of us would cherish some socks, pajamas, or fuzzy slippers. Other ideas might include hiring a season’s worth of snow removal or yard care.

Most importantly to reiterate is that we don’t want fruitcakes or anything we have to dust. And time—that most precious commodity—is what we want most to share with family and friends.

I created this recipe for the Italian trattoria I owned as a selection on our antipasti menu. It is delicious, which accounted for its being one of our most popular dishes.

Put the carrot, scallion, wine, a pinch of salt and 1/4 cup water in a pan; bring to a boil and simmer for 10 minutes.

Meanwhile, remove the small side muscle from the scallops, rinse with cold water and thoroughly pat dry.

Add the butter and oil to a 12 to 14-inch saute pan on high heat. Salt and pepper the scallops. Once the fat begins to smoke, gently add the scallops, making sure they are not touching each other. Sear the scallops for 1 1/2 minutes on each side. The scallops should have a golden crust on each side while still being translucent in the center.

Boil the cooking juices and vegetable garnish until reduced, then stir in the butter, cream and saffron.

Pour the hot sauce over the scallops, garnish with parsley.