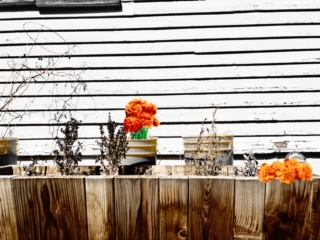 If ever there was a time to grow a garden, this is it.

The wisest among us have gardened for years. Their reasons are multiple: from saving money to just enjoying the pleasure of eating homegrown vegetables. Many people just like to work in the garden, enjoying the feel of dirt under their fingernails and the sweet smell of fertilizer.

Today, we are facing the most challenging of times. A worldwide pandemic that has claimed almost one million American lives and the grim threat that Vladimir Putin might expand his unprovoked war against Ukraine. Add to that a growing economy, but high inflation and rising costs of just about everything.

Last week, I spent $80 for what I thought was about $35 worth of groceries. And with the high cost of fuel, food prices are far from stabilizing.

I have wanted to be a farmer since I was a little boy. I liked playing in the dirt and in my young mind I thought that’s what farmers did. And there would be nobody to yell at them for dirtying their clothes.

In the back of [my grandparents’] brick bungalow in Cicero, Illinois, was a yard about the size of a one-car garage. There, reportedly, he grew enough cucumbers, cabbage, barley and hops to provide a year’s supply of pickles, sauerkraut and beer—each a staple of the Bohemian diet. The much-needed dill and caraway grew at the base of the damson plum tree that produced enough fruit to make enough slivovitz—a vile drink that tastes like what I can only imagine turpentine must taste like—to sicken his entire neighborhood of fellow Bohemians. Since he had yet to figure out how to grow tobacco on his backyard plantation, I can only guess that he bought the Lucky Strikes he chain-smoked. [excerpt from Deaths in the Family, Part I @ jimliska.com]

Growing up, we had a small backyard. I was given a small piece of it to garden, and I decided to grow carrots and plant marigolds in my mother’s flower boxes. My first crop was a disaster, though the marigolds flourished. I had lost interest in the carrots soon after they started sprouting. I didn’t bother to weed them very well and they became overgrown. The few carrots I harvested were short, fat and, as I remember, woody and tasteless.

Undeterred, I continued to plant vegetables and marigolds. I was never very successful. I still don’t like weeding the raised beds we now use as garden plots. But we carry on. We recognize the value of gardens over lawns and enjoy those moments of feeling empowered by our labor and rewarded by the produce grown.

With our generationally blended family, we’ve decided to be a bit more ambitious in our gardening attempt.

Planning the garden is the first step. What vegetables do we like to eat, and which ones will be worth the effort?

Weather is, of course, a major consideration to having a garden in southwest Montana. We have about a 28-day growing season, which means that every horizontal surface in the house should be surrendered to starter seeds that will not see the outdoors until after the last snowfall in June. Until then, we will dine off our laps.

Tomatoes are a given, but if not ripe by the end of August or mid-September at the latest, we’ll have brown-paper sacks full of green tomatoes. I’ve had little luck with peppers.

Root vegetables are the best bet. While everybody seems to like potatoes and onions, there is little enthusiasm for rutabagas or parsnips. Root vegetables and squash-family vegetables do well after winter sets in. Lettuces enjoy the cool weather, which means we can plant them early and late in the growing season. Cabbage can endure any kind of weather.

We all enjoy corn. That’s a tough call since growing up in the Midwest I knew that corn should be knee-high by the Fourth of July. My attempts at growing corn here have been futile.

While green beans are easy to grow, peas are not worth the effort. I think it was the great French chef, Daniel Boulud, who said peas should only be eaten in season, and then use the frozen peas.

We eat Brussels sprouts twice a year and a single stalk is more than what we would consume.

I love leeks, the national symbol of Wales. Two years ago I purchased two six-packs from the nursery for $1.29 each. A couple of days ago, I saw that leeks were $2.29 each at the market. We’re planting leeks this year.

I also love fresh herbs, so we’ll be growing parsley, sage, rosemary, and thyme. We’ll also have chervil, tarragon, and chives. Oregano is a no-brainer, along with basil—lots of basil.

The biggest drawback to gardening is that each crop matures all at once. That gives one the chance to either start canning or eating a single vegetable until its gone and another one has ripened.

And let’s not forget about zucchini.

Zucchini was invented in 1954 by the Italian botanist and chef, Giuseppe Zucchini. The record shows that he was trying to create a cucumber that one could cook. After nearly a decade of experiments, he was finally successful. What he hadn’t counted on was that the genetically modified vegetable could grow under any circumstance and was so prolific that Italians started picking off the flower, stuffing it with sausage and frying it in olive oil.

The zucchini was introduced to American gardeners with the promise that if nothing else would grow, the zucchini would flourish. One plant, as it turns out, can provide enough daily servings for a family of eight for almost three months.

And curiously, when one sees a zucchini that seems perfect, it will double in size while you go into the shed to get the shears.

I sure hope the price of vegetables comes down soon.

In anticipation of yet another bumper crop, we’ll be eating this soup until late fall.