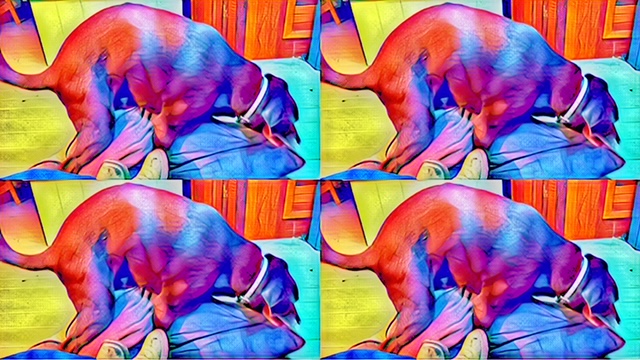 We’ve all met those people whose mental acuity seems akin to that of a ball rolling uphill. That group includes conspiracy theorists, non-believers of science, and many of those employed in the U.S. Congress—especially those Republicans whose home turf is somewhere in the Southeastern Atlantic states and whose loyalties belong to the last president.

From that latter group comes a North Carolina couple whose dog, a five-year-old mutt named Fezco, was surrendered to Stanly County Animal Protective Services after the pup “humped another male dog.” This news might have stayed private had the shelter not shared the unfortunate news on its Facebook page.

This couple, who might not even qualify for a Darwin award because they’re over-qualified for the “stupid-beyond-belief” category, determined that Fezco’s humping action clearly indicated that the dog was gay. This was something by which they could not abide.

“This is a common assumption,” thirty-three international veterinarians told me over the course of this past week, “of homophobic morons who know nothing about dogs.”

As most of us know, dogs will, without regard to sex, color or religious persuasion, hump any dog that comes along. They also express themselves in this manner on furniture and our friends’ legs. Humping is a form of play and an expression of dominance. It has nothing to do with sexual orientation. But we all know that. Well, most of us.

They will also sniff anything that might trigger the more than 3,000 scents that the homo sapiens among us can’t detect. This is the number one reason most of us really don’t like being licked by dogs. Scientifically it’s called a “fear of contact with butt sniffers.”

Cats, most of whom are at least as narcissistic as the Putin-loving Donald Trump, are satisfied with their own sense of satisfaction. Unlike Trump, they “groom” themselves without calling much attention to the activity. They don’t much care to smell another animal, choosing to merely walk around any potential victim. But cats do enjoy enough private intimacy to procreate faster than any other mammals except for laboratory rats, rabbits, and rock ‘n’ roll bass players.

But back to the Carolina couple. Why, I wonder, after detecting Fezco’s predilection for gay stuff, didn’t they seek psychological help and enroll the mutt in Canine Aversion Therapy? Certainly there are such courses offered in most states. Although such therapy among humans is highly suspect, with dogs it seems to work—at least temporarily.

How it works is that when a dog begins to hump another dog, the trainer merely gives it a treat. Unfortunately, when the dog is done eating it starts roaming around looking for attractive objects to hump or sniff.

Vigilance in this therapy is necessary, though it can lead to obesity—a whole other ball of wax that needs addressing at any number of the Puppy Fat Farms that are springing up around the country.

Female dogs, just for the record, are unlikely to hump but are highly susceptible to being humped by presumably straight dogs.

Many dogs of both sexes are, however, prone to gender identity qualms. Very few veterinarians provide sex-change procedures because they’re very expensive and nobody knows for sure if the dog really wants the operation.

For instance, if a male dog becomes a female dog, should it be allowed to participate in all-bitch competitive Frisbee contests? And what about dog racing? Or any number of canine activities that involves sticks or tennis balls? And what about bird hunting?

And if a female dog becomes a male dog, will it develop a desire to hump everything? And will it be allowed to use fire hydrants and the base of trees for what it will now have to stand three-legged to achieve.

The couple that gave up their pup were pretty bad dog owners to begin with. The poor mutt had heartworms and had yet to be neutered, let alone its not being accepted for what he was.

A gay couple from Charlotte heard about the dog and arranged to adopt it. They renamed him Oscar Wilde and introduced him to Harry, a rescue dog that was a groomsman in the couples’ wedding ceremony.

But there are other gender-type things to thing about. It’s difficult to fully address, but there are clearly pets identifying as non-binary or genderqueer. There are lesbian dogs, intersex dogs, bisexual dogs, asexual and agender dogs. Actually, there aren’t.

These are trying and turbulent times we live in. Some people seem to go out of their ways to make them more so.

Photo illustration by Courtney. A. Liska

A timeless Italian-American soup of pasta and beans. I like to add sausage.

In a large, deep pot over medium heat, heat oil. Add sausage and cook, breaking up with a wooden spoon, until cooked through, about 5 minutes. Stir in onion, carrots, and celery and cook until slightly softened, about 5 minutes.
Add garlic and cook until fragrant, 1 minute more. Season with salt and pepper.
Deglaze the pot with the wine and bring to a simmer, scraping the bottom of the pot with a wooden spoon. Next, add in beans (with their liquid), diced tomatoes, chicken broth, and Italian seasoning. Bring to a boil, then stir in ditalini.
Reduce heat to medium and cook until pasta is al dente, about 8 minutes. Taste and adjust seasoning.
Serve in bowls garnished with Parmesan and parsley.